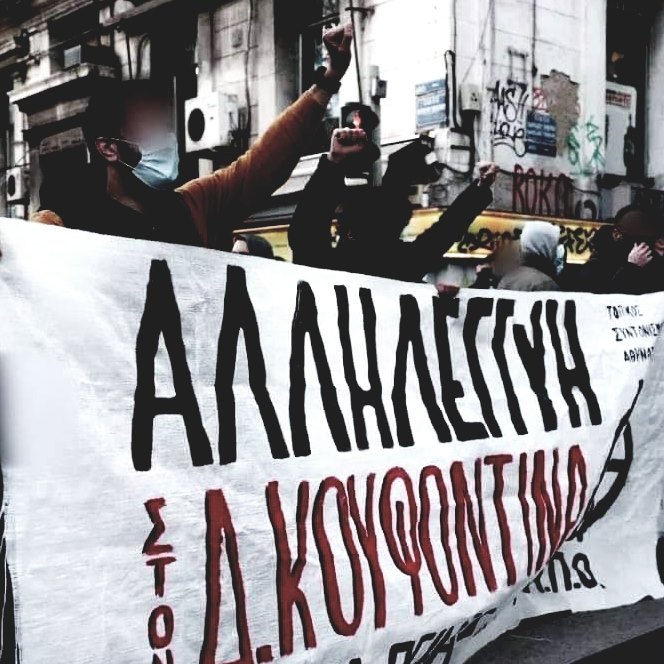 Dimitris Koufontinas, who has been on hunger strike since the 8th of January, and whose health is now in critical condition, is facing his calculated extermination, a clear political choice made by the government of New Democracy. The state mechanisms, which have been investing on fascistization, brutal exploitation and the intensification of repression against any form of social resistance, attacking constantly the anarchist movement, are now carving a horrific reality on the body of the hunger striker.

A reality in which the life of a political prisoner is weighted on the scale of the far right political agenda of a regime in generalized decay. These power-thirst tyrants, who have decided to condemn the hunger striker in death, are the ones who have been imposing impoverishment and concentration camps, where small children are endangered by cold, and have bred trafficking in every form, from sexual exploitation to child abuse. They are the ones who have been arresting and beating hundreds of people every day all over the country, because they “dare” to protest.
The prohibition of political protests, while the workers are crowded in the working places and public transportation, proves that, for those in power, the pandemic is nothing else but a tool of imposition. The deaths of thousands of people during the pandemic are the result of their policies, oriented towards profit and control, that led to the dissolution of the public health system and have imposed the overcrowding workplaces and markets. The authoritarian operations, in the form of curfews, attacks against protesters, continuous persecutions and the upgrading of charges, are steps towards the establishment of modern totalitarianism. The escalating social rage is at the moment expressed by the continuous and persistent mobilizations of hundreds of people, mainly from the anarchist movement, against repression and in solidarity with the hunger striker, but also by the mass protests against the restructing of public education. It is expressed through smaller and larger acts of resistance, which will multiply.
The hunger strike of Dimitris Koufontinas and the possibillity of him losing his life while in the hands of the state, is a point of no return. For the authoritarians, who will ratify in this way the imposition of the fascist state by declaring a war with unpredictable consequences, having a political prisoner as their first casualty. For the people of the struggle and the whole society that will find against them the murders of Koufontinas, their oppressors, totally unconstrained.

Dimitris Koufontinas must live
His struggle must win! 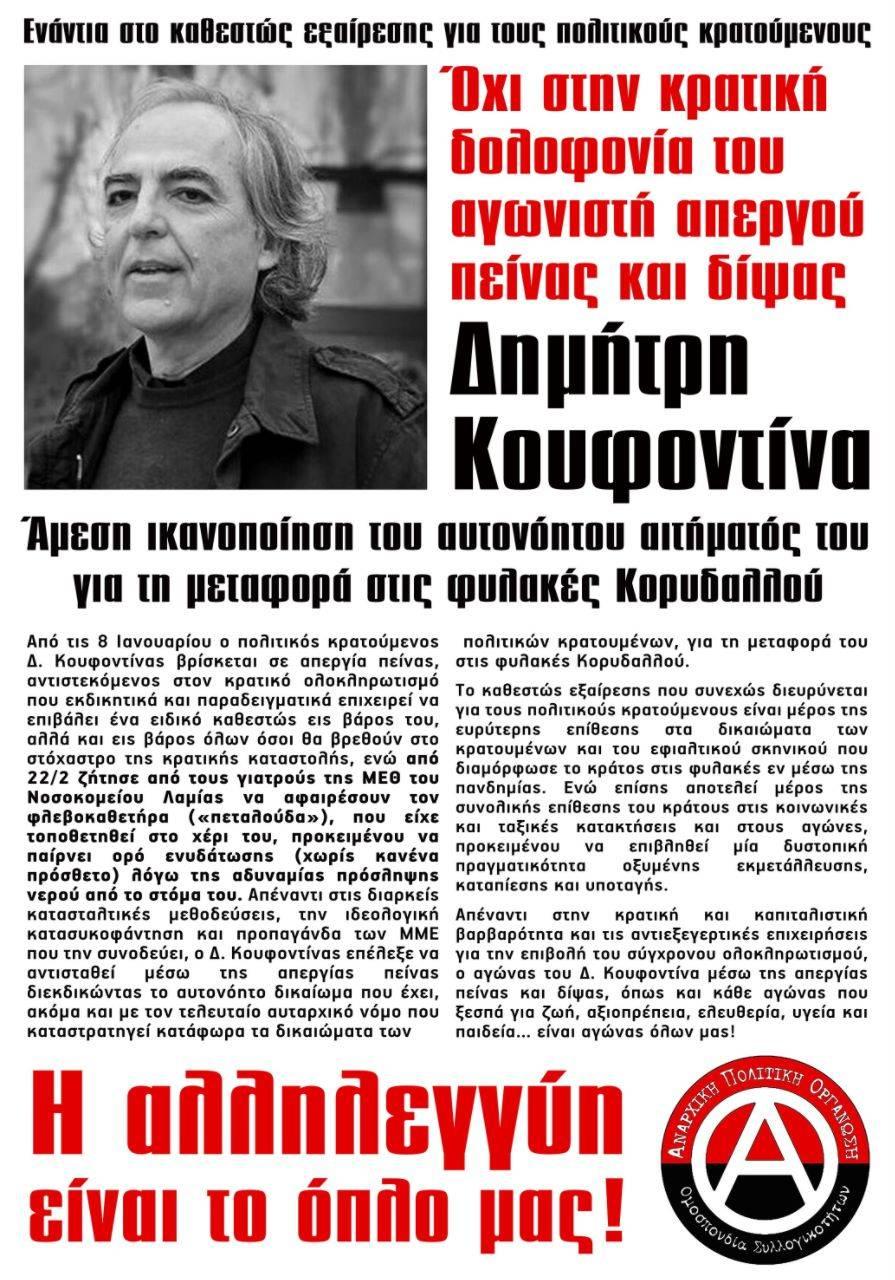 Against the state of exception for political prisoners
The State is murdering the hunger and thirst striker Dimitris Koufontinas-Resist!
Immediate fullfilment of his demand to be tranferrred to Korydallos prison
Since the 8th of January, the political prisoner D. Koufontinas is on hunger strike, resisting state totalitarianism, which vengefully attempts to impose a state of exception against him and against all those who are targeted by state repression. On February 22nd, he asked the doctors of the Intensive care unit of the Hospital of Lamia to remove the tubes from his arm that were hydrating him, since he could not drink water, due to exhaustion. Against the continuous repressive operations and the accompanying ideological intimidation and propaganda by the media, D. Koufontinas chose to resist by starting a hunger strike, demanding his indisputable right, which is granted even by the latest authoritarian law that infringes the rights of political prisoners, his tranfer to Korydallos prison.
The continuous expansion of the state of exception on political prisoners is part of the wider attack on the rights of the prisoners and of the horrific scenery in prisons, formed by the state during the pandemic. Moreover, it is part of the generalized attack by the state against social and class resistance and the struggles, in order to impose a dystopia of intensified exploitation, repression and submission.
Against the state and capitalist brutality and the counter-revolutionary operations for the imposition of modern totalitarianism, the struggle of D. Koufontinas, as every other struggle for life, dignity, freedom, health and education...is everyone's struggle!
SOLIDARITY IS OUR WEAPON!